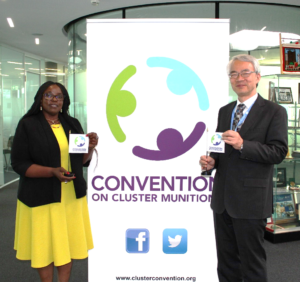 His Excellency Mr. Nobushige Takamizawa, Permanent Representative of Japan to the Conference on Disarmament in Geneva, paid a courtesy call on the ISU Director, Ms. Sheila N. Mweemba, on 11 June 2019. The Ambassador was accompanied by Colonel Jun Yamada, First Secretary and Defense Attaché of the Permanent Mission of Japan. The Director expressed her appreciation for their visit and also for Japan’s support in advancing the norms of the CCM. Japan was among the earliest States to ratify the CCM and destroyed all its cluster munition stockpiles more than 3 years ahead of its deadline. It also served as first Coordinator on Universalization of the CCM Coordination Committee. Ambassador Takamizawa assured the ISU Director of Japan’s steadfast commitment to the work of the Convention.